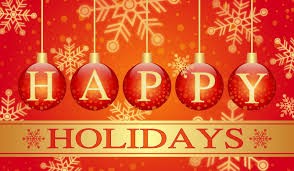 We would like to extend our warmest wishes to you and yours for joy and peace this holiday season.  Thank you for your loyalty and support throughout the year.

2020 was a very unusual and challenging year for many of us.  One Call Logistics continued success would never be possible without it’s strong One Call Family. Our amazing drivers and dedicated employees are truly the the back bone of our success.

With Covid-19 Cases climbing in Manitoba and everywhere around us, we have decided not to host a One Call Christmas Party this year, our plan will be to host a company event once the Covid-19 numbers diminish and Health Canada’s updates their protocols for bigger groups.

We would normally celebrate and recognize our 5 Year Award recipients at the Company Christmas Party; however, this year we have decided to celebrate their achievements through this Holiday News Letter.  We have seven recipients who are celebrating a 5 year recognition award.

Ed is married to Viktoria and they have 4 daughters (Leonie, Diana, Sara, Jamie); they live in Steinbach.  Ed was born in Zelenograd Kazakhstan and moved to Germany when he was 15 years old.  Ed and his family moved to Canada in 2006, where he was in the construction business.  Ed became a professional truck driver in 2014 and joined One Call Logistics on January 1st, 2015.

Ed is a terrific and professional truck driver; Ed is very approachable, and his social type of character makes others around him feel welcome and engaged.  He has been known to perform a few off the cuff speeches at company functions and is the unofficial One Call Logistics “Corn Hole” Champion.  Ed has been a fantastic operator for us, please continue your great work, we appreciate you very much, congratulations on your 5-year recognition award. 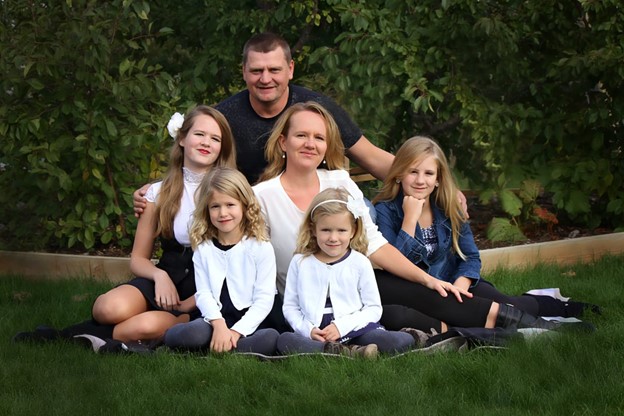 Roman started with One Call Logistics on March 28th, 2015.  Roman is married to Svetlana, they have 2 kids (Max & Arthur) and live in Winnipeg.  Roman was born in Uzbekistan and started his young career as a professional Chef.  He decided to become a professional truck driver 1995 in Israel and moved to Canada in 2012.

Roman started his career with us as a company driver and eventually bought his own unit to become an Owner Operator.  Roman is a very efficient truck driver, He’s a hard-working individual who has a serious look about him but he is also very funny person.  Roman, we greatly appreciate all of the hard work you’ve put in with us, congratulations on your 5-year recognition award. 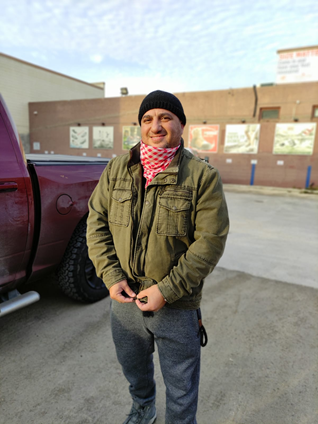 Alex joined One Call Logistics on June 1st, 2015, he is married to Katrina, they have 2 boys (Ian & Adam) and live in the Giroux area.  Alex was born in Belarus (Eastern Europe), he started as a CNC operator, a sales associate at an appliance store and decided to move to Canada with his family in 2012.  Once in Canada, he did a little bit of work in the construction industry but decided to become a professional truck driver at the end of 2012.

Alex is a quiet but passionate person, there’s nothing he won’t do for anybody else, he’s the type of person who you can call and he will drop anything at the drop of a hat to go help you.   He’s a great driver, he’s efficient, reliable professional and is always willing to do what needs to be done, we have never heard him complain about anything, he is a hard worker and a huge team player.  Alex, we appreciate all that you have done for One Call Logistics and we congratulate you on your 5-year recognition award.

Jaki joined us on February 23rd, 2015, he is married to Emily. Jaki has a daughter named Cassie who’s married to Tyler Barkman and they have 3 sons (Ross, Jasper & Sawyer). Daughter Kylie ; married to Chesney Koews.  Son Jaden and Daughter Arissa.  Jaki’s been a trucker for 24 years, 2.5 Million Miles under his belt with no accidents. According to Jaki:

“I love hot yoga, bud light and romantic walks on the beach.

I tell everyone I meet I don’t work anymore since driving for One Call because loving what you do for a living with great people doesn't feel like work.  THE END “

Jaki managed the Grunthal Auction Mart for 5 years after school and owned 2 chicken farms.  He raised Bisons and Ostriches for a few years and at one time he had 75 ostriches on his farm and was in the process of training on how to ride them, but the market was about to crash, so he decided to sell animals before the big crash. Jaki was born and raised in Steinbach and Grunthal, according to Jaki, “The hospital  spelled my name wrong; I was suppose to be a Jake but turned out being a Jaki and that explains why my doctor thought I was a girl when I was 14 ????.”

Jaki is terrific at building positive relationships with our fellow drivers and customers, Jaki is a people person who loves to make people around him feel welcome and happy, he’s always willing to help other drivers and we appreciate the knowledge and experience he brings to our team.  Jaki’s has always been a great “PR” representative of our company; he works hard and is always willing to go the extra mile for the team.  Thank you, Jaki and congratulations, on your 5-year recognition award! 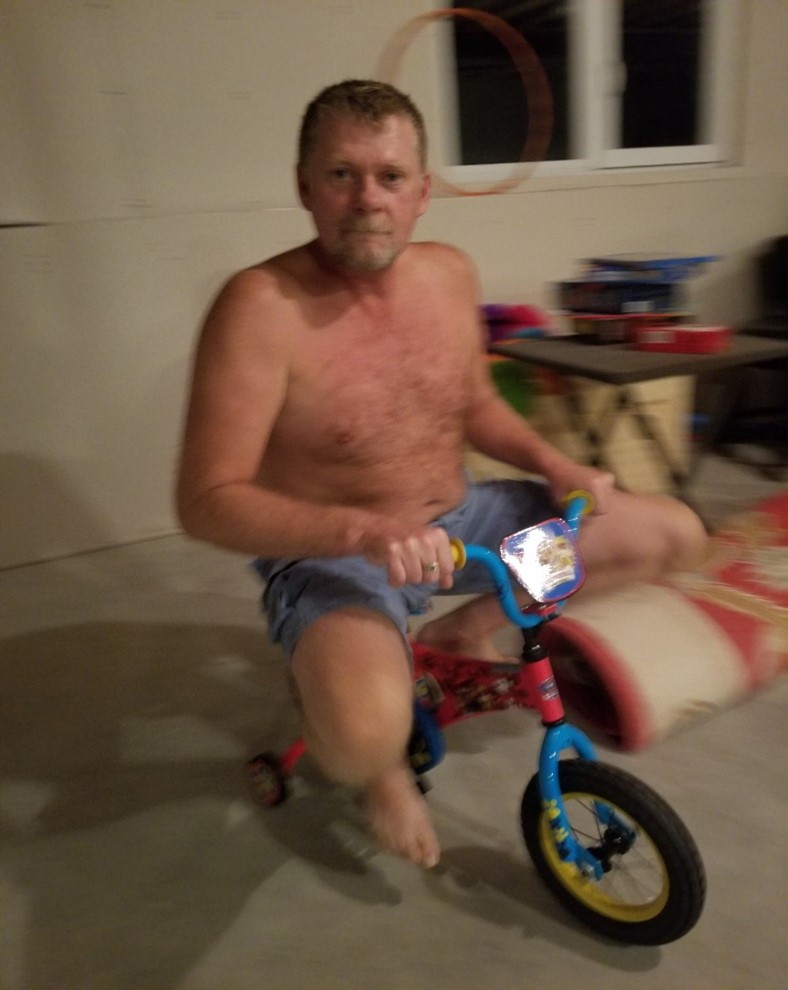 Oleg joined us on April 4th, 2015, he is married to Irina and they have two kids (Vlada & Viktoria) they live in Mitchell.  Oleg grew up in Russia, he graduated from the Military Academy and held several positions in the Military Logistics Services in Eastern Siberia, Russia.  Oleg moved to Canada in 2013 and has been in the trucking industry since 2014.

Oleg’s trucking experience is almost 2nd to none. He has gone from Company Driver to Owner Operator, he has hauled everything from big Milk Tankers, to regular dry freight and has hauled Livestock.  Oleg is a hard-working individual who is very handy, he is always willing to think outside the box and has a way of fixing issues with his equipment, he’s independently resourceful and willing to help anybody around him if needed. 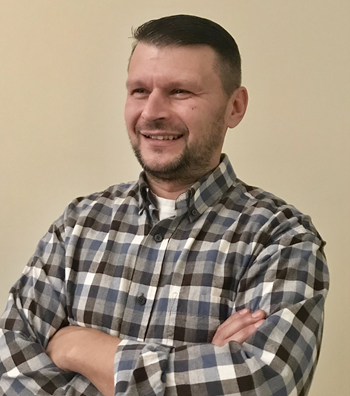 David was born in Kazakstan and moved to Nord Kawkraus where he spent most of his youth and began his career as a mechanic.  At the age of 23, David decided to move to Germany where he met the love of his life Inna, they got married a year later.  In Germany, David’s main job was Heavy Duty Machinery Operator and Forklift Driver.  David and his crew decided to move to Canada in 2003, where he worked for Mid Canada Milwork for 2 years.  David created a construction business in 2005 and decided to buy his first Tractor Unit in 2012.   David joined One Call Logistics in the summer of 2015.

When it comes to our local customers; David is Mr. One Call Logistics.  He is their direct point of contact; he is the face and personal connection to all our local customers.  David’s professionalism is second to none, he is a man of many skills, he is very resourceful.  David is Mr Local truck driver, Mr Dock Guy, Mr Yard guy, Mr. Fix It and brings many extra attributes to our company.  David has dedicated many long hours to us; you can usually see him walking around with a big smile on his face and his warming personality is infectious.  David’s favorite line is “I will do my best” well lucky for us; David’s best is better than many, he is absolutely amazing!  David, congratulations on your 5-year recognition award, thank you for all your hard work. 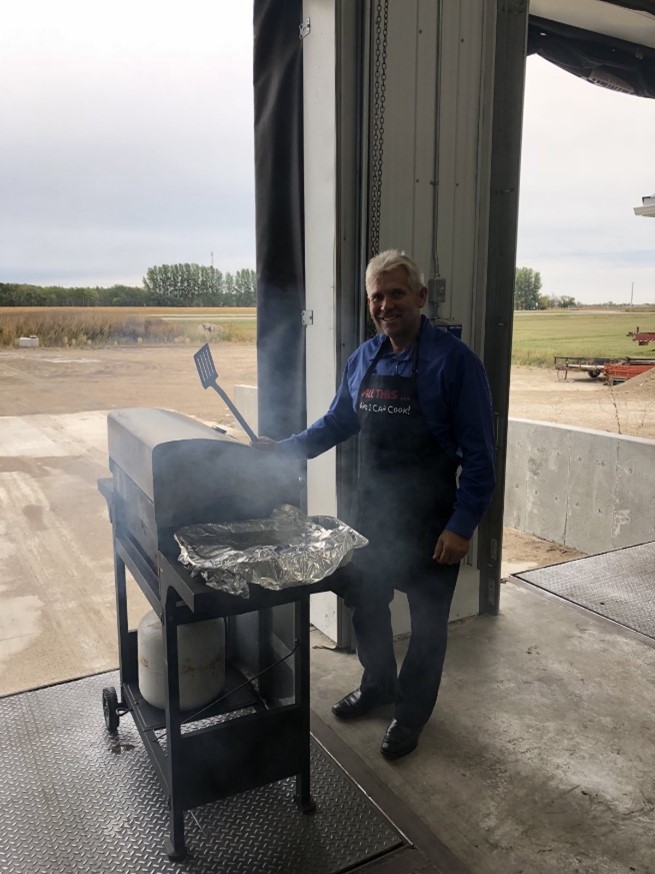 Andreas joined us straight out of University and began his young career with One Call Logistics back on May 4, 2015. Andreas is married to Darcy and they live in Steinbach.  Andreas was born on April 21, 1990 in Kazakhstan, where he lived until he was just over 5 years old. Then, in 1995, his family moved to Germany, where he spent much of his youth. While living in Germany he attended the Realschule Quierschied, where he was part of the athletics team; he was an avid freestyle wrestler, on a provincial level. While living in Germany, Andreas’ plan was always to pursue a career in IT ( it’s probably the reason why he’s the first stop for IT at One Call).   Andreas moved to Canada, in 2007, where he attended high school at the SRSS in Steinbach and that is where his focus towards a career path switched from IT to business. Thanks to Andreas’ instructors, his interest developed into a passion for business, and it ultimately led him graduating from the University of Manitoba in 2015 with a B.A. in Economics and started working at One Call directly out from University.  Andreas is always working on furthering his skills in accounting and is currently working on attaining a CPA designation. While having many hobbies over the years; now-a-days he enjoys cross-country skiing, biking, camping, fishing (especially ice fishing), hunting, reading, travelling, and working on projects around the house.

Andreas was our first official office employee here at One Call Logistics.  He was originally hired as a Dispatch Assistant / Junior Accountant and just like our young company at the time, Andreas’ role with the company grew and has blossomed into the role of Controller.  Andreas’ ability to research, understand and handle various issues is what makes him valuable for this company.  Andreas is our Axon Expert, he is our go to IT / Cell Phone / E-Log Tablet guy, and many more.  There is no project that he doesn’t attack head on.  He has played a vital role in the growth of our company and we appreciate all your hard work, congratulations on your 5-year recognition award.